A rotten script a day keeps the Doctor away 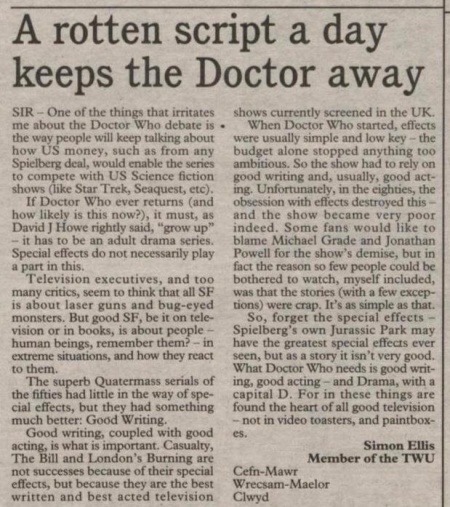 SIR One of the things that irritates me about the Doctor Who debate is the way people will keep talking about how US money, such as from any Spielberg deal, would enable the series to compete with US Science fiction shows (like Star Trek, Seaquest, etc).

If Doctor Who ever returns (and how likely is this now?), it must, as David J Howe rightly said, "grow up" - it has to be an adult drama series. Special effects do not necessarily play a part in this.

Television executives, and too many critics, seem to think that all SF is about laser guns and bug-eyed monsters. But good SF, be it on television or in books, is about people - human beings, remember them? - in extreme situations, and how they react to them.

The superb Quatermass serials of the fifties had little in the way of special effects, but they had something much better: Good Writing.

Good writing, coupled with good acting, is what is important. Casualty, The Bill and London's Burning are not successes because of their special effects, but because they are the best written and best acted television shows currently screened in the UK.

When Doctor Who started, effects were usually simple and low key - the budget alone stopped anything too ambitious. So the show had to rely on good writing and, usually, good acting. Unfortunately, in the eighties, the obsession with effects destroyed this - and the show became very poor indeed. Some fans would like to blame Michael Grade and Jonathan Powell for the show's demise, but in fact the reason so few people could be bothered to watch, myself included, was that the stories (with a few exceptions) were crap. It's as simple as that.

So, forget the special effects - Spielberg's own Jurassic Park may have the greatest special effects ever seen, but as a story it isn't very good. What Doctor Who needs is good writing, good acting - and Drama, with a capital D. For in these things are found the heart of all good television - not in video toasters, and paintboxes.

Member of the TWU