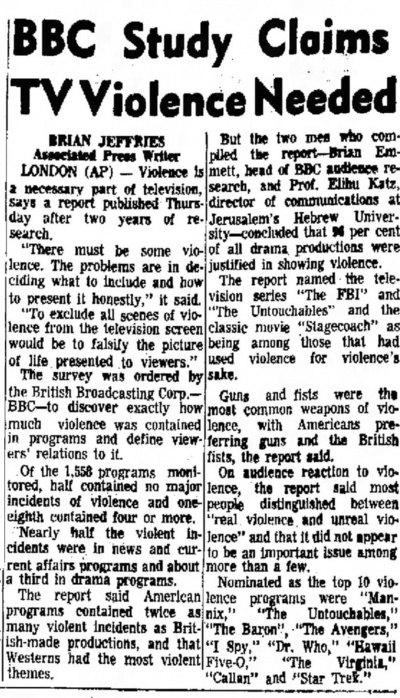 LONDON (AP) — Violence is a neccesary part of television, says a report published Thursday after two years of research.

"There must be some violence. The problems are in deciding what to include and how to present it honestly," it said.

"To exclude all scenes of violence from the television screen would be to falsify the picture of life presented to viewers."

The survey was ordered by the British Broadcasting Corp.—BBC—to discover exactly how much violence was contained in programs and define viewers' relations to it.

Of the 1,558 programs monitored, hall contained no major incidents of violence and one-eighth contained four or more,

"Nearly half the violent incidents were in news and cur, rent affairs programs and about, a third in drama programs."

The report said American programs contained twice as many violent Incidents as British-made productions, and that Westerns had the most violent themes.

But the two men who compiled the report—Brian Emmett, head of BBC audience research, and Prof. Elihu Katz, director of communications at Jerusalem's Hebrew University—concluded that ill per cent of all drama productions were justified in showing violence.

The report named the television series "The FBI" and "The Untouchables", and the classic movie "Stagecoach" as being among those that had used violence for violence's sake.

Guns and fists were the most common weapons of violence, with Americans preferring guns and the British fists, the report said.

On audience reaction to violence, the report said most people distinguished between "real violence and unreal violence" and that it did not appear to be an important issue among more than a few.