Great sponsor of the violence campaign 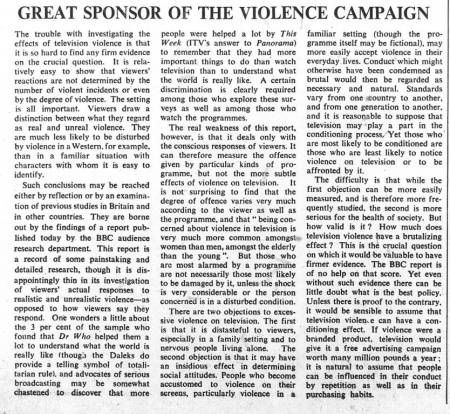 The trouble with investigating the effects of television violence is that it is so hard to find any firm evidence on the crucial question. It is relatively easy to show that viewers' reactions are not determined by the number of violent incidents or even by the degree of violence. The setting is all important. Viewers draw a distinction between what they regard as real and unreal violence. They are much less likely to be disturbed by violence in a Western, for example, than in a familiar situation with characters with whom it is easy to identify.

Such conclusions may be reached either by reflection or by an examination of previous studies in Britain and in other countries. They are borne out by the findings of a report published today by the BBC audience research department. This report is a record of some painstaking and detailed , research, though it is disappointingly thin in its investigation of viewers' actual responses to realistic and unrealistic violence—as opposed to how viewers say they respond. One wonders a little about the 3 per cent of the, sample who found that Dr Who helped them a lot to understand what the world is really like (though the Daleks do provide a telling symbol of totalitarian rule), and advocates of serious broadcasting may be somewhat chastened to discover that mote people were helped a lot by This Week (ITV's answer to Panorama) to remember that they had more important things to do than watch television than to understand what the world is really like. A certain discrimination is clearly required among those who explore these surveys as well as among those who watch the programmes.

The real weakness of this report, however, is that it deals only with the conscious responses of viewers. It can therefore measure the offence given by particular kinds of programme, but not the more subtle effects of violence on television. It is not surprising to find that the degree of offence varies very much according to the viewer as well as the programme, and that "being concerned about violence in television is very much more common amongst women than men, amongst the elderly than the young". But those who are most alarmed by a programme are not necessarily those most likely to be damaged by it, unless the shock is very considerable or the person concerned is in a disturbed condition.

There are two objections to excessive violence on television. The first is that it is distasteful to viewers, especially in a family setting and to nervous people living 'alone. The second objection is that it may have an insidious effect in determining social attitudes. People who become accustomed to violence on their screens, particularly violence in a familiar setting (though the programme itself may be fictional), may more easily accept violence in their everyday lives. Conduct which might otherwise have been condemned as brutal would then be regarded as necessary and natural. Standards vary from one country to another, and from one generation to another, and it is reasonable to suppose that television may play a part in the conditioning process/Yet those who are most likely to be conditioned are those who are least likely to notice violence on television or to be affronted by it.

The difficulty is that while the first objection can be more easily measured, and is therefore more frequently studied, the second is more serious for the health of society. But how valid is it ? How much does television violence have a brutalizing effect ? This is the crucial question on which it would be valuable to have firmer evidence. The BBC report is of no help on that score. Yet even without such evidence there can be little doubt what is the best policy. Unless there is proof to the contrary, it would be sensible to assume that television violet), e can have a conditioning effect. If violence were a branded product, television would give it a free advertising campaign worth many million pounds a year it is natural to assume that people can be influenced in their conduct by repetition as well as in their purchasing habits.