Violence every half hour 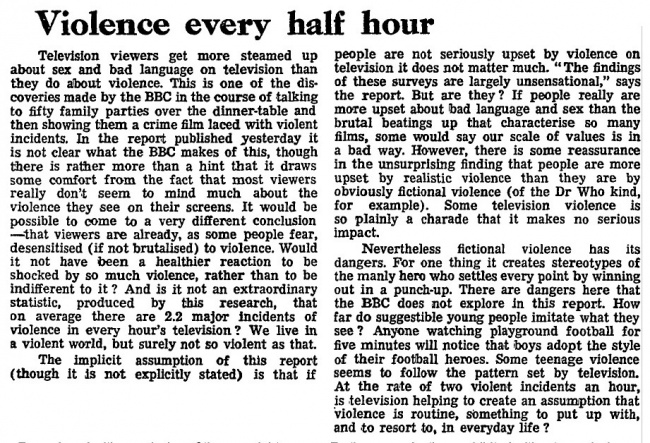 Television viewers get more steamed up about sex and bad language on television than they do about violence. This is one of the discoveries made by the BBC in the course of talking to fifty family parties over the dinner-table and then showing them a crime film laced with violent incidents. In the report published yesterday it is not clear what the BBC makes of this, though there is rather more than a hint that it draws some comfort from the fact that most viewers really don't seem to mind much about the violence they see on their screens. It would be possible to come to a very different conclusion —that viewers are already, as some people fear, desensitised (if not brutalised) to violence. Would it not have been a healthier reaction to be shocked by so much violence, rather than to be indifferent to it ? And is it not an extraordinary statistic, produced by this research, that on average there are 2.2 major incidents of violence in every hour's television ? We live in a violent world, but surely not so violent as that.

The implicit assumption of this report (though it is not explicitly stated) is that if people are not seriously upset by violence on television it does not matter much. "The findings of these surveys are largely unsensational," says the report. But are they ? If people really are more upset about bad language and sex than the brutal beatings up that characterise so many films, some would say our scale of values is in a bad way. However, there is some reassurance in the unsurprising finding that people are more upset by realistic violence than they are by obviously fictional violence (of the Dr Who kind, for example). Some television violence is so plainly a charade that it makes no serious impact.

Nevertheless fictional violence has its dangers. For one thing it creates stereotypes of the manly hero who settles every point by winning out in a punch-up. There are dangers here that the BBC does not explore in this report. How far do suggestible young people imitate what they see ? Anyone watching playground football for five minutes will notice that boys adopt the style of their football heroes. Some teenage violence seems to follow the pattern set by television. At the rate of two violent incidents an hour, is television helping to create an assumption that violence is routine, something to put up with, and to resort to, in everyday life ?