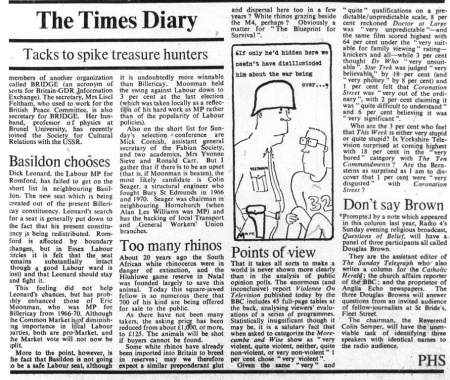 That it takes all sorts to make a world is never shown more clearly than in the analysis of public opinion polls. The enormous (and inconclusive) report Violence On Television published today by the BBC includes 45 full-page tables at the back, analysing viewers' evaluations of a series of programmes. Statistically insignificant though it may be. it is a salutary fact that when asked to categorize the Morecambe and Wise show as " very violent, quite violent, neither, quite non-violent, or very non-violent " 1 per cent chose " very violent ".

Given the same "very" and "quite" qualifications on a predictable/unpredictable scale, 8 per cent reckoned Doctor at Large was "very unpredictable"—and the same film scored highest with 64 per cent under the "very suitable for family viewing" rating—knickers and all—while 3 per cent thought Dr Who "very unsuitable". Star Trek was judged "very believable" by 18 per cent (and "very phoney" by 8 per cent) and 1 per cent felt that Coronation Street was "very out of the ordinary", with 2 per cent claiming it was "quite difficult to understand" and 6 per cent believing it was "very significant".

Who are the 3 per cent who feel that This Week is either very stupid or quite stupid? Is Yorkshire Television surprised at coming highest with 18 per cent in the very bored" category with The Ten Commandments? Are the Bernsteins as surprised as I am to discover that 1 per cent were "very disgusted" with Coronation Street?