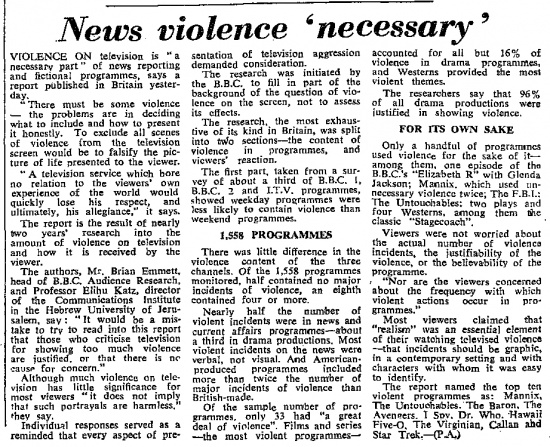 VIOLENCE ON television is " a necessary part" of news reporting and fictional programmes, says a report published in Britain yesterday.

There must be some violence — the problems are in deciding what to include and how to present it honestly. To exclude all scenes of violence from the television screen would be to falsify the picture of life presented to the viewer.

"A television service which bore no relation to the viewers' own experience of the world would quickly lose his respect, and ultimately, his allegiance," it says.

The report is the result of nearly two years' research into the amount of violence on television and how it is received by the viewer.

The authors, Mr. Brian Emmett, head of B.B.C. Audience Research, and Professor Elihu Katz, director of the Communications Institute in the Hebrew University of Jerusalem, say : "It would be a mistake to try to read into this report that those who criticise television for showing too much violence are justified, or that there is no cause for concern."

Although much violence on television has little significance for most viewers "it does not imply that such portrayals are harmless, they say.

Individual responses served as a reminded that every aspect of presentation of television aggression demanded consideration.

The research was initiated by the B.B.C. to fill in part of the background of the question of violence on the screen, not to assess its effects.

The research, the most exhaustive of its kind in Britain, was split into two sections—the content of violence in programmes, and viewers' reaction.

The first part, taken from a survey of about a third of B.B.C. 1, B.B.C. 2 and I.T.V. programmes, showed weekday programmes were less likely to contain violence than weekend programmes.

There was little difference in the violence content of the three channels. Of the 1,558 programmes monitored, half contained no major incidents of violence, an eighth contained four or more.

The researchers say that 96% of all drama productions were justified in showing violence.

FOR ITS OWN SAKE

Only a handful of programmes used violence for the sake of it—among them, one episode of the B.B.C.'s "Elizabeth R" with Glenda Jackson; Mannix. which used unnecessary violence twice; The F.B.I.; The Untouchables; two plays and four Westerns, among them the classic "Stagecoach".

Viewers were not worried about the actual number of violence incidents, the justifiability of the violence, or the believability of the programme.

"Nor are the viewers concerned about the frequency with which violent actions occur in programmes."

Most viewers claimed that "realism" was an essential element of their watching televised violence —that incidents should be graphic, in a contemporary setting and with characters with whom it was easy to identify.

The report named the top ten violent programmes as: Mannix, The Untouchables, The Baron, The Avengers, I Spy, Dr. Who, Hawaii Five-O, The Virginian, Callan and Star Trek—(PA)