The impact of Who 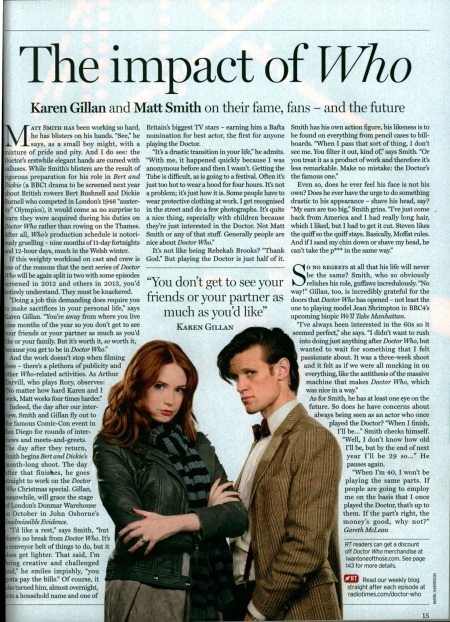 Karen Gillan and Matt Smith on their fame, fans - and the future

MATT SMITH HAS been working so hard, he has blisters on his hands. "See," he says, as a small boy might, with a mixture of pride and pity. And I do see: the Doctor's erstwhile elegant hands are cursed with calluses. While Smith's blisters are the result of rigorous preparation for his role in Bert and Dickie (a BBC1 drama to be screened next year about British rowers Bert Bushnell and Dickie Burnell who competed in London's 1948 "austerity" Olympics), it would come as no surprise to learn they were acquired during his duties on Doctor Who rather than rowing on the Thames. After all, Who's production schedule is notoriously gruelling - nine months of 11-day fortnights and 12-hour days, much in the Welsh winter.

If this weighty workload on cast and crew is one of the reasons that the next series of Doctor Who will be again split in two with some episodes screened in 2012 and others in 2013, you'd entirely understand. They must be knackered. "Doing a job this demanding does require you to make sacrifices in your personal life," says Karen Gillan. "You're away from where you live nine months of the year so you don't get to see your friends or your partner as much as you'd like or your family. But it's worth it, so worth it, because you get to be in Doctor Who."

And the work doesn't stop when filming does - there's a plethora of publicity and other Who-related activities. As Arthur Darvill, who plays Rory, observes: "No matter how hard Karen and I work, Matt works four times harder."

Indeed, the day after our inter, Smith and Gillan fly out to famous Comic-Con event in Diego for rounds of interviews and meets-and-greets. The day after they return, Smith begins Bert and Dickie's month-long shoot. The day after that finishes, he goes straight to work on the Doctor Who Christmas special. Gillan, meanwhile, will grace the stage of London's Donmar Warehouse in October in John Osborne's Inadmissible Evidence.

"I'd like a rest," says Smith, "but there's no break from Doctor Who. It's a conveyor belt of things to do, but it does get lighter. That said, I'm being creative and challenged and," he smiles impishly, "you gotta pay the bills." Of course, it also turned him, almost overnight, into a household name and one of Britain's biggest TV stars - earning him a Bafta nomination for best actor, the first for anyone playing the Doctor.

"It's a drastic transition in your life," he admits. "With me, it happened quickly because I was anonymous before and then I wasn't. Getting the Tube is difficult, as is going to a festival. Often it's just too hot to wear a hood for four hours. It's not a problem; it's just how it is. Some people have to wear protective clothing at work. I get recognised in the street and do a few photographs. It's quite a nice thing, especially with children because they're just interested in the Doctor. Not Matt Smith or any of that stuff. Generally people are nice about Doctor Who."

It's not like being Rebekah Brooks? "Thank God." But playing the Doctor is just half of it. Smith has his own action figure, his likeness is to be found on everything from pencil cases to billboards. "When I pass that sort of thing, I don't see me. You filter it out, kind of," says Smith. "Or you treat it as a product of work and therefore it's less remarkable. Make no mistake: the Doctor's the famous one."

Even so, does he ever feel his face is not his own? Does he ever have the urge to do something drastic to his appearance - shave his head, say? "My ears are too big," Smith grins. "I've just come back from America and I had really long hair, which I liked, but I had to get it cut. Steven likes the quiff so the quiff stays. Basically, Moffat rules. And if I sand my chin down or shave my head, he can't take the p*** in the same way."

So No REGRETS at all that his life will never be the same? Smith, who so obviously relishes his role, guffaws incredulously. "No way!" Gillan, too, is incredibly grateful for the doors that Doctor Who has opened - not least the one to playing model Jean Shrimpton in BBC4's upcoming biopic We'll Take Manhattan.

"I've always been interested in the 60s so it seemed perfect," she says. "I didn't want to rush into doing just anything after Doctor Who, but wanted to wait for something that I felt passionate about. It was a three-week shoot and it felt as if we were all mucking in on everything, like the antithesis of the massive machine that makes Doctor Who, which was nice in a way."

As for Smith, he has at least one eye on the future. So does he have concerns about always being seen as an actor who once played the Doctor? "When I finish, I'll be..." Smith checks himself. "Well, I don't know how old I'll be, but by the end of next year I'll be 29 so..." He pauses again.

"When I'm 40, I won't be playing the same parts. If people are going to employ me on the basis that I once played the Doctor, that's up to them. If the part's right, the money's good, why not?" RT readers can get a discount off Doctor Who merchandise at iwantoneofthose.com. See page 143 for more details.

Read our weekly blog straight after each episode at radiotimes.com/doctor-who