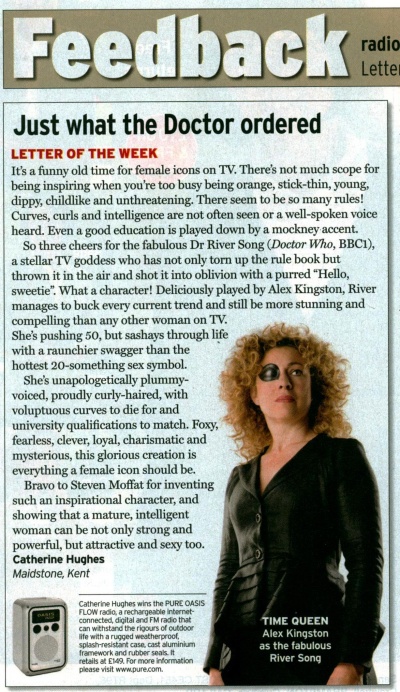 Just what the Doctor ordered

It's a funny old time for female icons on TV. There's not much scope for being inspiring when you're too busy being orange, stick-thin, young, dippy, childlike and unthreatening. There seem to be so many rules! Curves, curls and intelligence are not often seen or a well-spoken voice heard. Even a good education is played down by a mockney accent.

So three cheers for the fabulous Dr River Song (Doctor Who, BBC1), a stellar TV goddess who has not only torn up the rule book but thrown it in the air and shot it into oblivion with a purred "Hello, sweetie". What a character! Deliciously played by Alex Kingston, River manages to buck every current trend and still be more stunning and compelling than any other woman on TV She's pushing 50, but sashays through life with a raunchier swagger than the hottest 20-something sex symbol.

She's unapologetically plummy-voiced, proudly curly-haired, with voluptuous curves to die for and university qualifications to match. Foxy, fearless, clever, loyal, charismatic and mysterious, this glorious creation is everything a female icon should be.

Bravo to Steven Moffat for inventing such an inspirational character, and showing that a mature, intelligent woman can be not only strong and powerful, but attractive and sexy too.