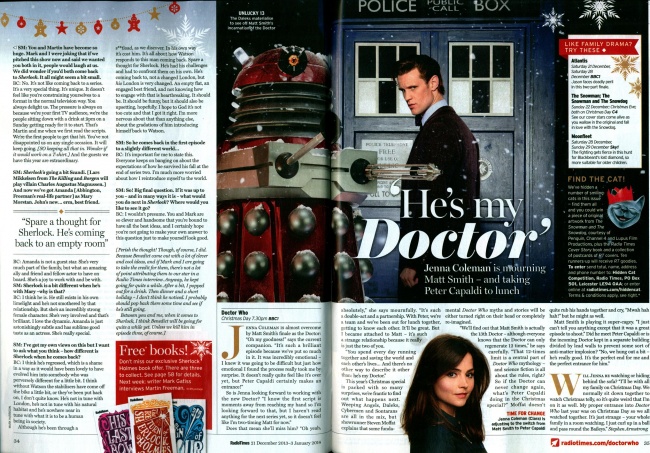 JENNA COLEMAN IS almost overcome by Matt Smith's finale as the Doctor: "Oh my goodness!" says the current companion. "It's such a brilliant episode because we've put so much in it. It was incredibly emotional - I knew it was going to be difficult but just how emotional I found the process really took me by surprise. It doesn't really quite feel like it's over yet, but Peter Capaldi certainly makes an entrance!"

So is Jenna looking forward to working with the new Doctor? "I know the first script is moments away from reaching my hand so I'm looking forward to that, but I haven't read anything for the next series yet, so it doesn't feel like I'm two-timing Matt for now."

Does that mean she'll miss him? "Oh yeah, absolutely," she says mournfully. "It's such a double-act and a partnership. With Peter, we're a team and we've been out for lunch together, getting to know each other. It'll be great. But I became attached to Matt - it's such a strange relationship because it really is just the two of you.

"You spend every day running together and saving the world and each other's lives... And there's no other way to describe it other than: he's my Doctor."

This year's Christmas special is packed with so many surprises, we're frantic to find out what happens next. Weeping Angels, Daleks, Cybermen and Sontarans are all in the mix, but showrunner Steven Moffat explains that some fundamental Doctor Who myths and stories will be either turned right on their head or completely re-imagined.

"We'll find out that Matt Smith is actually the 13th Doctor - although everyone knows that the Doctor can only regenerate 12 times," he says carefully. "That 12-times limit is a central part of Doctor Who mythology - and science fiction is all about the rules, right? So if the Doctor can never change again, what's Peter Capaldi doing in the Christmas special?" Moffat doesn't quite rub his hands together and cry, "Mwah hah hah!" but he might as well.

Matt Smith is playing it super-cagey. "I just can't tell you anything except that it was a great episode to shoot." Did he meet Peter Capaldi or is the incoming Doctor kept in a separate building divided by lead walls to prevent some sort of anti-matter implosion? 'No, we hung out a bit - he's really good. It's the perfect end for me and the perfect entrance for him."

WILL JENNA BE watching or hiding behind the sofa? "I'll be with all my family on Christmas Day. We normally sit down together to watch Christmas telly, so it's quite weird that I'm on it as well. My proper entrance into Doctor Who last year was on Christmas Day so we all watched together. It's just strange - your whole family in a room watching. I just curl up in a ball and pass round the Baileys."

Caption: TIME FOR CHANGE Jenna Coleman (Clara) is adjusting to the switch from Matt Smith to Peter Capaldi