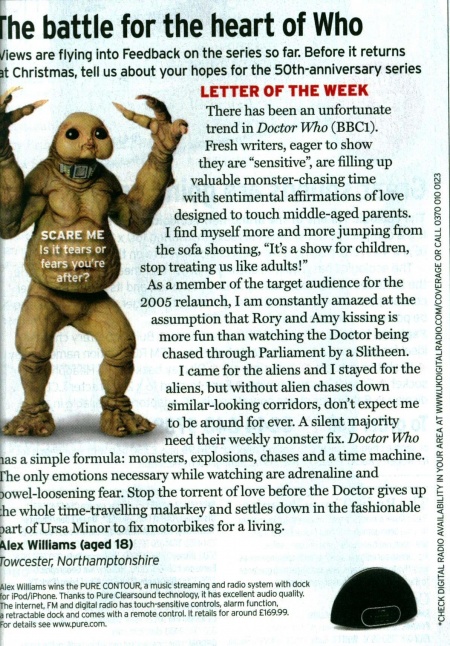 The battle for the heart of Who

Views are flying into Feedback on the series so far. Before it returns at Christmas, tell us about your hopes for the 50th-anniversary series

There has been an unfortunate trend in Doctor Who (BBC1). Fresh writers, eager to show they are "sensitive", are filling up valuable monster-chasing time with sentimental affirmations of love designed to touch middle-aged parents. I find myself more and more jumping from the sofa shouting, "It's a show for children, stop treating us like adults!"

As a member of the target audience for the 2005 relaunch, I am constantly amazed at the assumption that Rory and Amy kissing is more fun than watching the Doctor being chased through Parliament by a Slitheen.

I came for the aliens and I stayed for the aliens, but without alien chases down similar-looking corridors, don't expect me to be around for ever. A silent majority need their weekly monster fix. Doctor Who has a simple formula: monsters, explosions, chases and a time machine. The only emotions necessary while watching are adrenaline and bowel-loosening fear. Stop the torrent of love before the Doctor gives up the whole time-travelling malarkey and settles down in the fashionable part of Ursa Minor to fix motorbikes for a living.

Caption: SCARE ME Is it tears or fears you're after