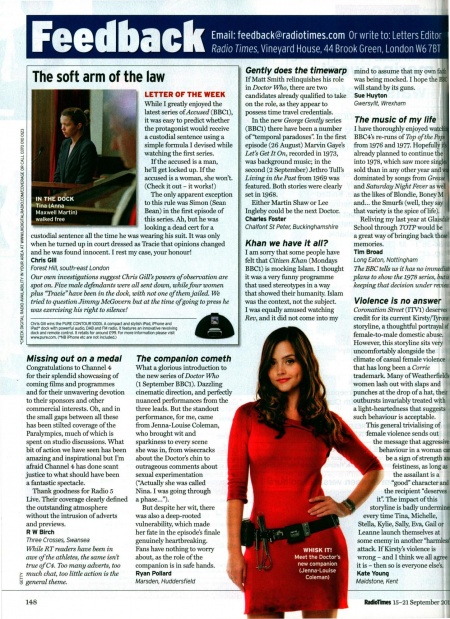 What a glorious introduction to the new series of Doctor Who (1 September BBC1). Dazzling cinematic direction, and perfectly nuanced performances from the three leads. But the standout performance, for me, came from Jenna-Louise Coleman, who brought wit and sparkiness to every scene she was in, from wisecracks about the Doctor's chin to outrageous comments about sexual experimentation ("Actually she was called Nina. I was going through a phase...").

But despite her wit, there was also a deep-rooted vulnerability, which made her fate in the episode's finale genuinely heartbreaking. Fans have nothing to worry about, as the role of the companion is in safe hands.

Gently does the timewarp

If Matt Smith relinquishes his role in Doctor Who, there are two candidates already qualified to take on the role, as they appear to possess time travel credentials.

In the new George Gently series (BBC1) there have been a number of "temporal paradoxes". In the first episode (26 August) Marvin Gaye's Let's Get It On, recorded in 1973, was background music; in the second (2 September) Jethro Tull's Living in the Past from 1969 was featured. Both stories were clearly set in 1968.

Either Martin Shaw or Lee Ingleby could be the next Doctor.