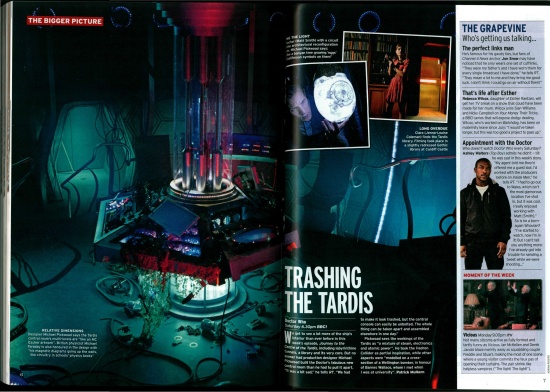 We get to see a lot more of the ship's interior than ever before in this week's episode, Journey to the Centre of the Tardis, including labyrinthine tunnels, a library and its very core. But no sooner had production designer Michael Pickwoad built the Doctor's fabulous new control room than he had to pull it apart. "It was a bit sad," he tells RT. "We had to make it look trashed, but the central console can easily be unbolted. The whole thing can be taken apart and assembled elsewhere in one day."

Pickwoad sees the workings of the Tardis as "a mixture of steam, electronics and atomic power". He took the Hadron Collider as partial inspiration, while other aspects were "modelled on a cross-section of a Wellington bomber, in honour of Barnes Wallace, whom I met when I was at university". Patrick Mulkern

Doctor (Matt Smith) with a circuit the architectural reconfiguration m Michael Pickwoad says: like a banyan tree growing 'eggs' Gallifreyan symbols on them"

RELATIVE DIMENSIONS Designer Michael Pickwoad says the Tardis control room's multi-levels are "like an MC Escher artwork". British physicist Michael Faraday is also honoured in the design with "his magnetic diagrams going up the walls, like circuitry in schools' physics books"

Appointment with the Doctor

Who doesn't watch Doctor Who every Saturday? Ashley Walters (Top Boy) admits he didn't — till he was cast in this week's story. "My agent told me they'd offered me a guest slot. I'd worked with the producers before on Inside Men," he tells RT. "I had to go out to Wales, which isn't the most glamorous location I've shot in, but it was cool. I really enjoyed working with Matt [Smith]." So is he a born-again Whovian? "I've started to watch, now I'm in it! But I can't tell you anything more: I've already got into trouble for sending a tweet while we were shooting..."