Careful what you wish for ... 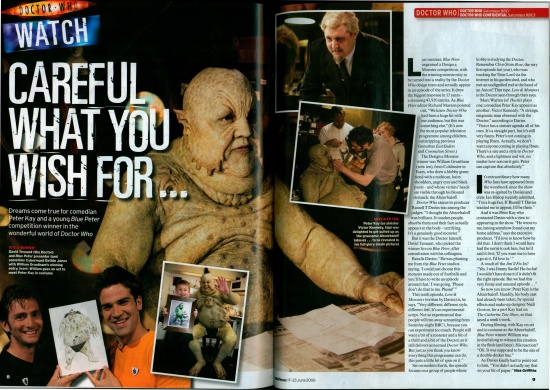 Last summer, Blue Peter organised a Design a Monster competition, with the winning monstrosity to be turned into a reality by the Doctor Who design team and actually appear in an episode of the series. It drew the biggest response in 13 years a stunning 43,920 entries. As Blue Peter editor Richard Marson pointed out, "We knew Doctor Who had been a huge hit with our audience, but this was something else." (It's now he most popular television programme among children, outstripping previous favourites EastEnders and Coronation Street.)

The Design a Monster winner was William Grantham (now ten), from Colchester in I ssex, who drew a blobby green i i end with a mohican, hairy ,houlders, angry eyes and black pants - and whose victims' heads are visible through his bloated stomach: the Abzorbaloff. Doctor Who executive producer Russell T Davies was among the judges: "I thought the Abzorbaloff was brilliant. It touches people, absorbs them and their face actually appears in the body - terrifying. It's a genuinely good monster."

But it was the Doctor himself, David Tennant, who picked the winner live on Blue Peter, after consultation with his colleagues.

Recalls Davies: "He was phoning me from the Blue Peter studios saying, 'I could just choose this monster made out of footballs and you'll have to write an episode around that.' I was going, 'Please don't do that to me. Please!"

This tenth episode, Love & Monsters (written by Davies) is, he says, "Very different: different style, different feel. It's an experimental script. Not so experimental that people will run away screaming from Saturday-night BBC 1, because you can experiment too much. People still want a bit of a monster and a bit of a thrill and a bit of the Doctor, so it still delivers as normal Doctor Who. But just as you think you know everything this programme can do, this puts a little bit of spin on it."

Set on modern Earth, the episode focuses on a group of people whose hobby is studying the Doctor. Remember Clive (from Rose, the very first episode last year), who was tracking the Time Lord via the internet in his garden shed, and who met an undignified end at the hand of an Auton? That type. Love & Monsters is the Doctor seen through their eyes.

Marc Warren (of Hustle) plays one; comedian Peter Kay appears as another: Victor Kennedy. "A strange, enigmatic man obsessed with the Doctor," according to Davies. "Victor has a sinister agenda all of his own. It's a straight part, but it's still very funny. Peter's not coming in playing Ibsen. Actually, we don't want anyone coming in playing Ibsen. There's a size and a style to Doctor Who, and a lightness and wit, no matter how serious it gets. Peter can capture that absolutely."

It's extraordinary how many Who fans have appeared from the woodwork since the show was re-ignited by Davies and crew. Ian Hislop recently admitted, "I'm a huge fan. If Russell T Davies wanted me to appear, I'd be there."

And it was Peter Kay who contacted Davies with a view to appearing in the show. "He wrote to me, having somehow found out my home address," says the executive producer. "I'd love to know how he did that. I don't think I would have had the nerve to ask him, but he'd said it first: 'If you want me to have a go at it, I'd love to."

A touch of the Jim'll Fix Its? "Yes, I was Jimmy Savile! Ha-ha-ha! I wouldn't have done it if it didn't fit the right episode. But we had this very funny and unusual episode ..."

So now you know: Peter Kay is the Abzorbaloff. Handily, his body cast had already been taken, by special effects and make-up designer Neill Gorton, for a part Kay had on The Catherine Tate Show, so that saved a week's work.

During filming, with Kay on set and in costume as the Abzorbaloff, Blue Peter winner William was invited along to witness his creation in the flesh (and latex). His reaction? "Oh. It was supposed to be the size of a double-decker bus."

As Davies kindly had to point out to him, "You didn't actually say that on your bit of paper."

Caption: Green Peter. Peter Kay (as sinister Victor Kennedy, top) was delighted to get suited up as the gruesome Abzorbaloff (above) ... to be revealed in his full glory (main picture)