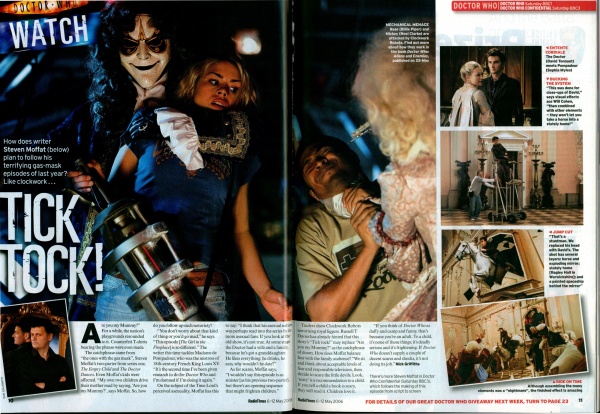 How does writer Steven Moffat (below) plan to follow his terrifying gas-mask episodes of last year? Like clockwork ...

Are you my Mummy?" For a while, the nation's playgrounds resounded to it. Counterfeit T-shirts bearing the phrase were even made.

The catchphrase came from "the ones with the gas mask", Steven Moffat's two-parter from series one, The Empty Child and The Doctor Dances. Even Moffat's kids were affected. "My own two children drive their mother mad by saying, 'Are you my Mummy?', says Moffat. So, how do you follow up such notoriety?

"You don't worry about that kind of thing or you'd go mad," he says. "This episode [The Girl in the Fireplace] is so different." The writer this time tackles Madame de Pompadour, who was the mistress of 18th-century French King Louis XV. "It's the second time I've been given research to do for Doctor Who and I'm damned if I'm doing it again."

On the subject of the Time Lord's perceived asexuality, Moffat has this to say: "I think that his asexual nature was perhaps read into the series by its more asexual fans. If you look at the old show, it's not true. At some stage the Doctor had a wife and a family, because he's got a granddaughter. He likes everything: he drinks, he eats, why wouldn't he date?"

As for scares, Moffat says, "I wouldn't say this episode is as sinister [as his previous two-parter], but there's an opening sequence that might frighten children."

Trailers show Clockwork Robot, rrorising royal liggers. Russell T Davies has already hinted that this story's "Tick tock!" may replace "Are you my Mummy?" as the catchphrase of doom. How does Moffat balance fear with the family audience? "We sit and think about acceptable levels of ear and responsible television, then decide to scare the little devils. Look, 'scary' is a recommendation to a child. If you tell a child a book is scary, they will read it. Children love it.

"If you think of Doctor Who as daffy and camp and funny, that's because you're an adult. To a child, it's none of those things; it's deadly serious and it's frightening. If Doctor Who doesn't supply a couple of decent scares and shocks, it's not doing its job."

There's more Steven Moffat in Doctor Who Confidential (Saturday BBC3), which follows the making of this episode from script to screen

Rose (Billie Piper) and Mickey (Noel Clarke) are attacked by Clockwork Robots. Find out more about how they work in the book Doctor Who: Aliens and Enemies, published on 25 May

"This was done for close-ups of David," says visual effects ace Will Cohen, "then combined with other elements - they won't let you take a horse into a stately home!"

"That's a stuntman. We replaced his head with David's. The shot has several layers: horse and exploding mirror; stately home [Ragley Hall in Warwickshire]; and a painted spaceship behind the mirror"

Although assembling the many elements was a nightmare", the finished effect is amazing