The Mick of Time 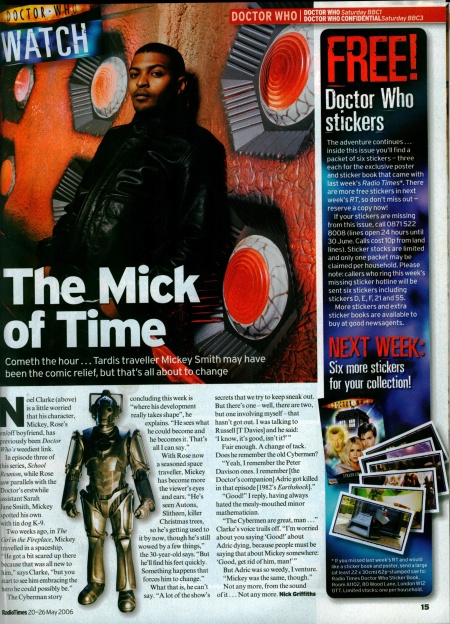 Cometh the hour ... Tardis traveller Mickey Smith may have been the comic relief, but that's all about to change

Noel Clarke (above) is a little worried that his character, Mickey, Rose's on/off boyfriend, has previously been Doctor Who's weediest link. In episode three of his series, School Reunion, while Rose aw parallels with the Doctor's erstwhile assistant Sarah Jane Smith, Mickey potted his own with tin dog K-9. Two weeks ago, in The girl in the Fireplace, Mickey travelled in a spaceship. 'He got a bit scared up there because that was all new to him," says Clarke, "but you start to see him embracing the zero he could possibly be."

The Cyberman story concluding this week is "where his development really takes shape", he explains. "He sees what he could become and he becomes it. That's all I can say."

With Rose now a seasoned space traveller, Mickey has become more the viewer's eyes and ears. "He's seen Autons, Slitheen, killer Christmas trees, so he's getting used to it by now, though he's still wowed by a few things," the 30-year-old says. "But he'll find his feet quickly. Something happens that forces him to change."

What that is, he can't say. "A lot of the show's secrets that we try to keep sneak out. But there's one-well, there are two, but one involving myself that hasn't got out. I was talking to Russell [T Davies] and he said: 'I know, it's good, isn't it?'"

Fair enough. A change of tack. Does he remember the old Cybermen?

"Yeah, I remember the Peter Davison ones. I remember [the Doctor's companion] Adric got killed in that episode [1982's Earthshock]."

"Good!" I reply, having always hated the mealy-mouthed minor mathematician.

"The Cybermen are great, man ..." Clarke's voice trails off. "I'm worried about you saying 'Good!' about Adric dying, because people must be saying that about Mickey somewhere: 'Good, get rid of him, man!"'

But Adric was so weedy, I venture. "Mickey was the same, though." Not any more, from the sound of it ... Not any more.

The adventure continues ... inside this issue you'll find a packet of six stickers - three each for the exclusive poster and sticker book that came with last week's Radio Times*. There are more free stickers in next week's RT, so don't miss out - reserve a copy now!

If your stickers are missing from this issue, call 0871522 8008 (lines open 24 hours until 30 June. Calls cost 10p from land lines). Sticker stocks are limited and only one packet may be claimed per household. Please note: callers who ring this week's missing sticker hotline will be sent six stickers including stickers D, E, F, 21 and 55.

More stickers and extra sticker books are available to buy at good newsagents.