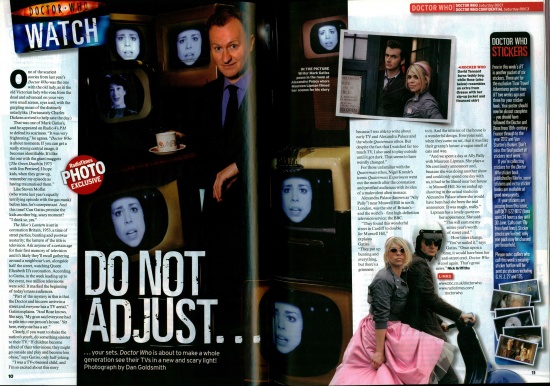 Do not adjust ... your sets. Doctor Who is about to make a whole generation see their TVs in a new and scary light! Photograph by Dan Goldsmith

One of the scariest stories from last year's Doctor Who was the one with the old lady, as in the old Victorian lady who rose from the dead and advanced on your very own small screen, eyes iced, with the gurgling moan of the distinctly unladylike. (Fortunately Charles Dickens arrived to help save the day.)

That was one of Mark Gatiss's, and he appeared on Radio 4's PM to defend its scariness. "It was very frightening," he agrees. "Doctor Who is about moments. If you can get a really strong central image, it becomes identifiable. It's like the one with the giant maggots (The Green Death in 1973 with Jon Pertwee). I hope kids, when they grow up, remember my episode as having traumatised them."

Like Steven Moffat (who wrote last year's equally terrifying episode with the gas mask) before him, he's unrepentant. And this time? Can Gatiss promise the kids another big, scary moment? "I think so, yes."

The Idiot's Lantern is set in coronation Britain, 1953, a time of street parties, bunting and postwar austerity; the lantern of the title is television. Ask anyone of a certain age for their first memory of television and it's likely they'll recall gathering around a neighbour's set, alongside half the street, watching Queen Elizabeth II's coronation. According to Gatiss, in the week leading up to the event, two million televisions were sold. It marked the beginning of today's mass audiences.

"Part of the mystery in this is that the Doctor and his crew arrive in a street and everyone has a TV aerial," Gatiss explains. "And Rose knows. She says, 'My gran said everyone had to pile into one person's house.' Yet here, everyone has a set."

Clearly, if you want to shake the nation's youth, do something sinister to their TV. "If children become afraid of their televisions, they might go outside and play and become less obese," says Gatiss, only half joking.

"I was a TV-obsessed child, and I'm so excited about this story because I was able to write about early TV and Alexandra Palace and the whole Quatermass ethos. But despite the fact that I watched far too much TV, I also used to play outside until it got dark. That seems to have weirdly changed."

For those unfamiliar with the Quatermass ethos, Nigel Kneale's iconic Quatermass Experiment went out the month after the coronation and petrified audiences with its idea of a malevolent alien menace.

Alexandra Palace (known as "Ally Pally") near Muswell Hill in north London, was the site of Britain's — and the world's — first high-definition television service: the BBC.

"They found this wonderful street in Cardiff to double for Muswell Hill," explains Gatiss. "They put up bunting and everything, but there's a grimness to it. And the interior of the house is a wonderful design. Everyone said, when they came on set, that it was like their granny's house: a vague smell of cats and wee.

"And we spent a day at Ally Pally with Maureen Lipman. She plays a 50s continuity announcer and, because she was doing another show and could only spend one day with us, it had to be filmed near her house — in Muswell Hill. So we ended up shooting in the actual studio in Alexandra Palace where she would have been had she been the real announcer. It was magic, really."

Lipman has a lovely quote on her appearance. She said: "This will earn me my entire year's worth of street cred."

"You've nailed it," says Gatiss. "Once upon a ime, it would have been her anti-street cred. Doctor Who is cool again. That's great news." Nick Griffiths

Free in this week's RT is another packet of six stickers. Three are for the exclusive Time Travel Adventures poster from RT two weeks ago and three for your sticker book. Your poster should now be almost complete - you should have followed the Doctor and Rose from 18th-century France through to the year 2012 and Van Statten's Bunker. Don't miss the final packet of stickers next week.

If you're collecting stickers for the Doctor Who sticker book, published by Merlin, more stickers and extra sticker books are available at good newsagents.

If your stickers are missing from this issue, call 0871 522 8012 (lines open 24 hours a day until 30 June. Calls cost 10p from land lines). Sticker stocks are limited; only one pack may be claimed per household.

Please note: callers who call this week's missing-sticker hotline will be sent six stickers including G, H, J, 27 and 125.

ROCKER WHO David Tennant turns teddy boy, while Rose (also below) resembles an extra from Grease with her zip-up jacket and flounced skirt