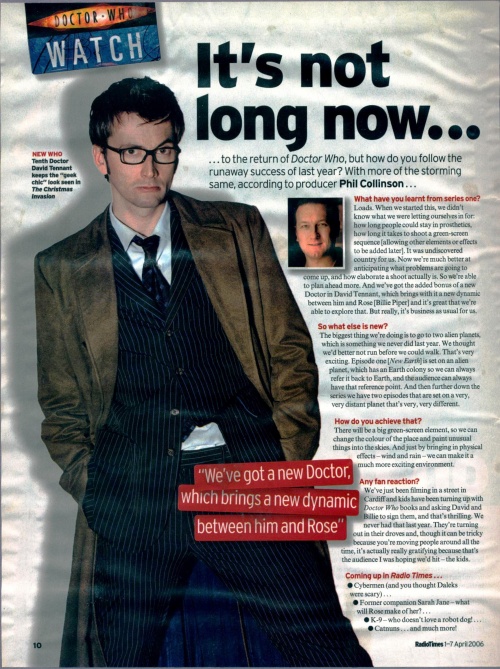 ... to the return of Doctor Who, but how do you follow the runaway success of last year? With more of the storming same, according to producer Phil Collinson ...

What have you learnt from series one?

Loads. When we started this, we didn't know what we were letting ourselves in for how long people could stay in prosthetics. how long it takes to shoot a green-screen sequence [allowing other elements or effects to be added later]. It was undiscovered country for us. Now we're much better at ,anticipating what problems are going to come up, and how elaborate a shoot actually is. So we're able to plan ahead more. And we've got the added bonus of a new Doctor in David Tennant, which brings with it a new dynamic between him and Rose [Billie Piper] and it's great that we're able to explore that. But really, it's business as usual for us

So what else is new?

The biggest thing we're doing is to go to two alien planets which is something we never did last year. We thought we'd better not run before we could walk. That's very exciting. Episode one [New Earth] is set on an alien planet, which has an Earth colony so we can always refer it back to Earth, and the audience can always have that reference point. And then further down I series we have two episodes that are set on a very, very distant planet that's very, very different.

How do you achieve that?

There will be a big green-screen element, so we can change the colour of the place and paint unusual things into the skies. And just by bringing in physical effects — wind and rain — we can make it a much more exciting environment. Any fan reaction?

We've just been filming in a street in Cardiff and kids have been turning up with Doctor Who books and asking David and Billie to sign them, and that's thrilling, we never had that last year. They're turn out in their droves and, though it can be tricky because you're moving people around all the time, it's actually really gratifying because that the audience I was hoping we'd hit — the kids.

Coming up in Radio Times ...

• Cybermen (and you thought Daleks were scary) .. .

• Former companion Sarah Jane — what will Rose make of her? .. .