Talk of the devil 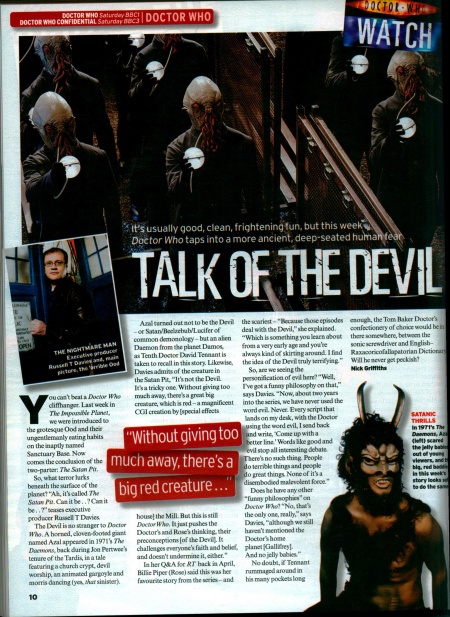 It's usually good, clean, frightening fun, but this week. Doctor Who taps into a more ancient, deep-seated human fear

You can't beat a Doctor Who cliffhanger. Last week in The Impossible Planet, we were introduced to the grotesque Ood and their ungentlemanly eating habits on the inaptly named Sanctuary Base. Now comes the conclusion of the two-parter: The Satan Pit.

So, what terror lurks beneath the surface of the planet? "Ah, it's called The Satan Pit. Can it be..? Can it be..?" teases executive producer Russell T Davies.

The Devil is no stranger to Doctor Who. A horned, cloven-footed giant named Azal appeared in 1971's The Daemons, back during Jon Pertwee's tenure of the Tardis, in a tale featuring a church crypt, devil worship, an animated gargoyle and morris dancing (yes, that sinister).

Azal turned out not to be the Devil — or Satan/Beelzebub/Lucifer of common demonology — but an alien Daemon from the planet Damos, as Tenth Doctor David Tennant is taken to recall in this story. Likewise, Davies admits of the creature in the Satan Pit, "It's not the Devil. It's a tricky one. Without giving too much away, there's a great big creature, which is red — a magnificent CGI creation by [special effects house] the Mill. But this is still DoctorWho. It just pushes the Doctor's and Rose's thinking, their preconceptions [of the Devil]. It challenges everyone's faith and belief, and doesn't undermine it, either."

In her Q&A for RT back in April, Billie Piper (Rose) said this was her favourite story from the series — and the scariest — "Because those episodes deal with the Devil," she explained. "Which is something you learn about from a very early age and you're always kind of skirting around. I find the idea of the Devil truly terrifying."

So, are we seeing the personification of evil here? "Well, I've got a funny philosophy on that," says Davies. "Now, about two years into the series, we have never used the word evil. Never. Every script that lands on my desk, with the Doctor using the word evil, I send back and write, 'Come up with a better line.' Words like good and evil stop all interesting debate. There's no such thing. People do terrible things and people do great things. None of it's a disembodied malevolent force."

Does he have any other "funny philosophies" on Doctor Who? "No, that's the only one, really," says Davies, "although we still haven't mentioned the Doctor's home planet [Gallifrey]. And no jelly babies."

No doubt, if Tennant rummaged around in his many pockets long enough, the Tom Baker Doctor's confectionery of choice would be in there somewhere, between the sonic screwdriver and English-Raxacoricofallapatorian Dictionary. Will he never get peckish?

Caption: SATANIC THRILLS. In 1971's The Daemons, Azal (left) scared the jelly babies out of young viewers, and the big, red baddie in this week's story looks set to do the same