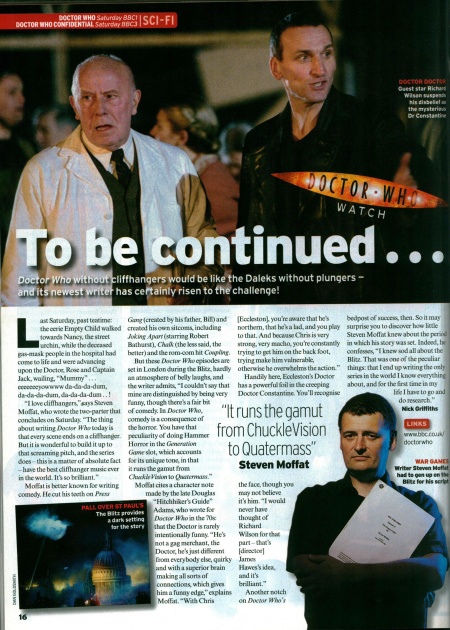 Doctor Who without cliffhangers would be like the Daleks without plungers — has certainly risen to the challenge!

"I love cliffhangers," says Steven Moffat, who wrote the two-parter that concludes on Saturday. "The thing about writing Doctor Who today is that every scene ends on a cliffhanger. But it is wonderful to build it up to that screaming pitch, and the series does — this is a matter of absolute fact — have the best cliffhanger music ever in the world. It's so brilliant."

Moffat is better known for writing comedy. He cut his teeth on Press Gang (created by his father, Bill) and created his own sitcoms, including Joking Apart (starring Robert Bathurst), Chalk (the less said, the better) and the rom-com hit Coupling.

But these Doctor Who episodes are set in London during the Blitz, hardly an atmosphere of belly laughs, and the writer admits, "I couldn't say that mine are distinguished by being very funny, though there's a fair bit of comedy. In Doctor Who, comedy is a consequence of the horror. You have that peculiarity of doing Hammer Horror in the Generation Game slot, which accounts for its unique tone, in that it runs the gamut from ChuckleVision to Quatermass."

Moffat cites a character note made by the late Douglas "Hitchhiker's Guide" Adams, who wrote for Doctor Who in the 70s: that the Doctor is rarely intentionally funny. "He's not a gag merchant, the Doctor, he's just different from everybody else, quirky and with a superior brain making all sorts of connections, which gives him a funny edge," explains Moffat. "With Chris [Eccleston], you're aware that he's northern, that he's a lad, and you play to that. And because Chris is very strong, very macho, you're constantly trying to get him on the back foot, trying make him vulnerable, otherwise he overwhelms the action."

Handily here, Eccleston's Doctor has a powerful foil in the creeping Doctor Constantine. You'll recognise the face, though you may not believe it's him. "I would never have thought of Richard Wilson for that part — that's [director] James Hawes's idea, and it's brilliant."

Another notch on Doctor Who's bedpost of success, then. So it may surprise you to discover how little Steven Moffat knew about the period in which his story was set. Indeed, he confesses, "I knew sod all about the Blitz. That was one of the peculiar things: that I end up writing the o series in the world I know everything about, and for the first time in my life I have to go and do research."

Caption: WAR GAMES Writer Steven Moffat had to gen up on the Blitz for his script