Let's not be beastly to Daleks 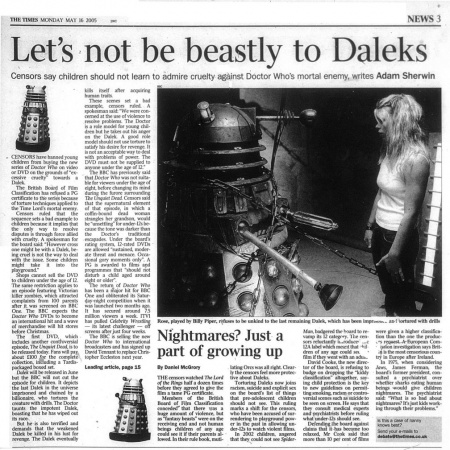 CENSORS have banned young children from buying the new series of Doctor Who on video or DVD on the grounds of "excessive cruelty" towards a Dalek.

The British Board of Film Classification has refined a PG certificate to the series because of torture techniques applied to the Time Lord's mortal enemy. Censors ruled that the sequence sets a bad example to children because it implies that the only way to resolve disputes is through force allied with cruelty. A spokesman for the board said: "However cross one might be with a Dalek, being cruel is not the way to deal with the issue. Some children might take it into the playground."

Shops cannot sell the DVD to children under the age of 12. The same restriction applies to an episode featuring Victorian killer zombies, which attracted complaints from 100 parents after it was screened on BBC One. The BBC expects the Doctor Who DVDs to become an international hit and a wave of merchandise will hit stores before Christmas.

The first DVD, which includes another controversial episode, The Unquiet Dead, is to be released today. Fans will pay about £100 for the complete collection, including a Tardis-packaged boxed set.

Dalek will be released in June but the BBC will not cut the episode for children. It depicts the last Dalek in the universe imprisoned and chained by a billionaire, who tortures the creature with drills. The Doctor taunts the impotent Dalek, boasting that he has wiped out its race.

But he is also terrified and demands that the weakened Dalek be killed in his lust for revenge. The Dalek eventually kills itself after acquiring human traits.

These scenes set a bad example, censors ruled. A spokesman said: "We were concerned at the use of violence to resolve problems. The Doctor is a role model for young children but he takes out his anger on the Dalek. A good role model should not use torture to satisfy his desire for revenge. It is not an acceptable way to deal with problems of power. The DVD must not be supplied to anyone under the age of 12."

The BBC has previously said that Doctor Who was not suitable for viewers under the age of eight, before changing its mind during the furore surrounding The Unquiet Dead. Censors said that the supernatural element of that episode, in which a coffin-bound dead woman strangles her grandson, would be "unsettling" for under-12s because the tone was darker than the Doctor's traditional escapades. Under the board's rating system, 12-rated DVDs are allowed "sustained, moderate threat and menace. Occasional gory moments only". A PG is awarded to films and programmes that "should not disturb a child aged around eight or older".

The return of Doctor Who has been a major hit for BBC One and obliterated its Saturday-night competition when it was launched two months ago. It has secured around 7.5 million viewers a week. ITV1 has pulled Celebrity Wrestling — its latest challenger — off screens after just four weeks. The BBC is selling the new Doctor Who to international broadcasters and has signed up David Tennant to replace Christopher Eccleston next year.

Nightmares? Just a part of growing up

THE censors watched The Lord of the Rings half a dozen times before they agreed to give the film a tame PG certificate. Members of the British Board of Film Classification conceded that there was as a huge amount of violence, but as "fantasy beasts" were on the receiving end and not human beings children of any age could see it if their parents allowed. In their rule book, mutilating Orcs was all right. Clearly the censors feel more protective about Daleks.

Torturing Daleks now joins racism, suicide and explicit sex on the board's list of things that pre-adolescent children should not see. This ruling marks a shift for the censors, who have been accused of surrendering to playground power in the past in allowing under-12s to watch violent films. In 2002 children, angered that they could not see Spider-Man, badgered the board to revamp its 12 category. The censors reluctantly introduced the 12A label which meant that children of any age could see the film if they went with an adult.

David Cooke, the new director of the board, is refusing to budge on dropping the "kiddy classification" altogether, saying child protection is the key to new guidelines on permitting smoking, racism or controversial scenes such as suicide to be seen on screen. He says that they consult medical experts and psychiatrists before ruling what under-12s should see. Defending the board against claims that it has become too relaxed, Mr Cook said that more than 10 per cent of films were given a higher classification than the one the producers requested. A European Commission investigation says Britain is the most censorious country in Europe after Ireland.

In 1975, when considering Jaws, James Ferman, the board's former president, consulted a psychiatrist over whether sharks eating human beings 'would give children nightmares. The psychiatrist said: "What is so bad about nightmares? It's just kids working through their problems."

Is this a case of nanny knows best?

Caption: Rose, played by Billy Piper, refuses to be unkind to the last remaining Dalek, which has been imprisoned and tortured with drills