Dr Who too scary for young children 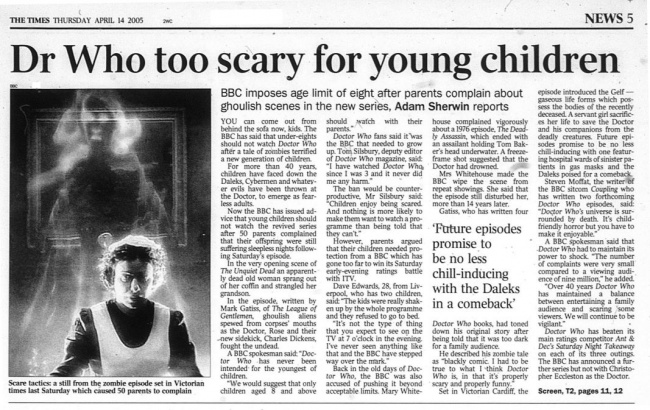 YOU can come out from behind the sofa now, kids. The BBC has said that under-eights should not watch Doctor Who after a tale of zombies terrified a new generation of children.

For more than 40 years, children have faced down the Daleks, Cybermen and whatever evils have been thrown at the Doctor, to emerge as fearless adults.

Now the BBC has issued advice that young children should not watch the revived series after 50 parents complained that their offspring were still suffering sleepless nights following Saturday's episode.

In the very opening scene of The Unquiet Dead an apparently dead old woman sprang out of her coffin and strangled her grandson.

In the episode, written by Mark Gatiss, of The League of Gentlemen, ghoulish aliens spewed from corpses' mouths as the Doctor, Rose and their -new sidekick, Charles Dickens, fought the undead.

A BBC spokesman said: "Doctor Who - has never been intended for the youngest of children.

"We would suggest that only children aged 8 and above should watch with their parents."

Doctor Who fans said it was the BBC that needed to grow up. Tom Silsbury, deputy editor of Doctor Who magazine, said: "I have watched Doctor Who since I was 3 and it never did me any harm."

The ban would be counterproductive, Mr Silsbury said: "Children enjoy being scared. And nothing is more likely to make them want to watch a programme than being told that they can't"

However, parents argued that their children needed protection from a BBC which has gone too far to win its Saturday early-evening ratings battle with ITV.

Dave Edwards, 28, from Liverpool, who has two children, said: "The kids were really shaken up by the whole programme and they refused to go to bed. "It's not the type of thing that you expect to see on the TV at 7 o'clock in the evening. I've never seen anything like that and the BBC have stepped way over the mark"

Back in the old days of Doctor Who, the BBC was also accused of pushing it beyond acceptable limits. Mary White house complained vigorously about a 1976 episode, The Deadly Assassin, which ended with an assailant holding Tom Baker's head underwater. A freeze-frame shot suggested that the Doctor had drowned.

Mrs Whitehouse made the BBC wipe the scene from repeat showings. She said that the episode still disturbed her, more than 14 years later. Gatiss, who has written four Doctor Who books, had toned down his original story after being told that it was too dark for a family audience.

He described his zombie tale as "blackly comic I had to be true to what I think Doctor Who is, in that it's properly scary and properly funny."

Set in Victorian Cardiff, the episode introduced the Gelf — gaseous life forms which possess the bodies of the recently deceased. A servant girl sacrifices her life to save the Doctor and his companions from the deadly creatures. Future episodes promise to be no less chill-inducing with one featuring hospital wards of sinister patients in gas masks and the Daleks poised for a comeback Steven Moffat, the writer of the BBC sitcom Coupling who has written two forthcoming Doctor Who episodes, said: "Doctor Who's universe is surrounded by death. It's child-friendly horror but you have to make it enjoyable."

A BBC spokesman said that -Doctor Who had to maintain its power to shock "The number of complaints were very small compared to a viewing audience of nine million," he added. "Over 40 years Doctor Who has maintained a balance between entertaining a family audience and scaring 'some viewers. We will continue to be vigilant" Doctor Who has beaten its main ratings competitor Ant & Dec's Saturday Night Takeaway on each of its three outings. The BBC has announced a further series but not with Christopher Eccleston as the Doctor.

Caption: Scare tactics: a still from the zombie episode set in Victorian times last Saturday which caused 50 parents to complain