The Doctor faces his newest adversary ... the Canadians 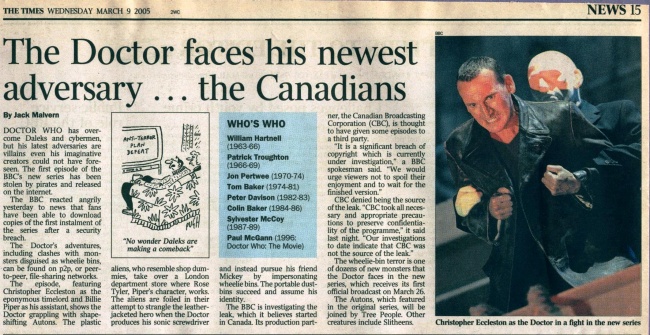 DOCTOR WHO has overcome Daleks and cybermen, but his latest adversaries are villains even his imaginative creators could not have foreseen. The first episode of the BBC's new series has been stolen by pirates and released on the internet.

The BBC reacted angrily yesterday to news that fans have been able to download copies of the first instalment of the series after a security breach.

The Doctor's adventures, including clashes with monsters disguised as wheelie bins, can be found on p2p, or peer-to-peer, file-sharing networks.

The episode, featuring Christopher Eccleston as the eponymous timelord and Billie Piper as his assistant, shows the Doctor grappling with shape-shifting Autons. The plastic aliens, who resemble shop dummies, take over a London department store where Rose Tyler, Piper's character, works. The aliens are foiled in their attempt to strangle the leather-jacketed hero when the Doctor produces his sonic screwdriver and instead pursue his friend Mickey by impersonating wheelie bins. The portable dustbins succeed and assume his identity.

The BBC is investigating the leak, which it believes started in Canada. Its production partner. The Canadian Broadcasting corporation (CBC). is thought to have given some episodes to a third party.

It is a significant breach of copyright which is currently under investigation." a BBC spokesman said. "We would urge viewer not to spoil their enjoyment and to wait for the finished version."

The wheelie-bin terror is one of dozens of new monsters that the Doctor faces in the new series, which receives its first official broadcast on March 26.

The Autons, which featured in the original series, will be joined by Tree People. Other creatures include Slitheens.

Caption: Christopher Ecclesion as the Doctor in a fight in the new series