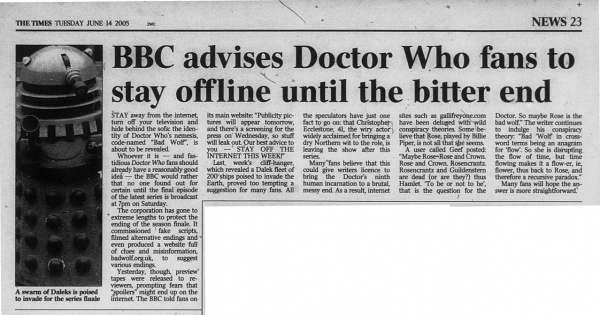 STAY away from the Internet, turn off your television and hide behind the sofa: the identity of Doctor Who's nemesis, code-named 'Bad Wolf', is about to be revealed.

Whoever it is—and fastidious Doctor Who fans should already have a reasonably good idea — the BBC would rather that no one found out for certain until the final episode of the latest series is broadcast at 7pm on Saturday.

The corporation has gone to extreme lengths to protect the ending of the season finale. It commissioned fake scripts, filmed alternative endings and even produced a website full of clues and misinformation, badwolf.org.uk, to suggest various endings.

Yesterday, though, preview' tapes were released to reviewers, prompting fears that "Spoilers" might end up on the internet The BBC told fans on its main website: "Publicity pictures will appear tomorrow, and there's a screening for the press on Wednesday, so stuff will leak out Our best advice to you — STAY OFF THE INTERNET THIS WEEK!"

Last week's cliff-hanger, which revealed a Dalek fleet of 200 ships poised to invade the Earth, proved too tempting a suggestion for many fans. All the speculators have just one fact to go on: that Christopher Ecclestone, 41, the wiry actor widely acclaimed for bringing a dry Northern wit to the role, is leaving the show after this series.

Many fans believe that this could give writers licence to bring the Doctor's ninth human incarnation to a brutal, messy end. As a result, internet sites such as gallifreyone.com have been deluged with wild conspiracy theories. Some believe that Rose, played by Billie Piper, is not all that she seems.

A user called Geef posted: "Maybe Rose-Rose and Crown. Rose and Crown. Rosencrantz Rosencrantz and Guildenstern are dead (or are they?) thus Hamlet. "To be or not to be", that is the question for the Doctor. So maybe Rose is the bad wolf." The writer continues to indulge his conspiracy theory: "Bad Wolf in crossword terms being an anagram for 'flow'. So she is disrupting the flow of time, but time flowing makes it a flow-er, ie, flower, thus back to Rose, and therefore a recursive paradox."

Many fans will hope the answer is more straightforward.

Caption: A swarm of Daleks is poised to invade for the series finale